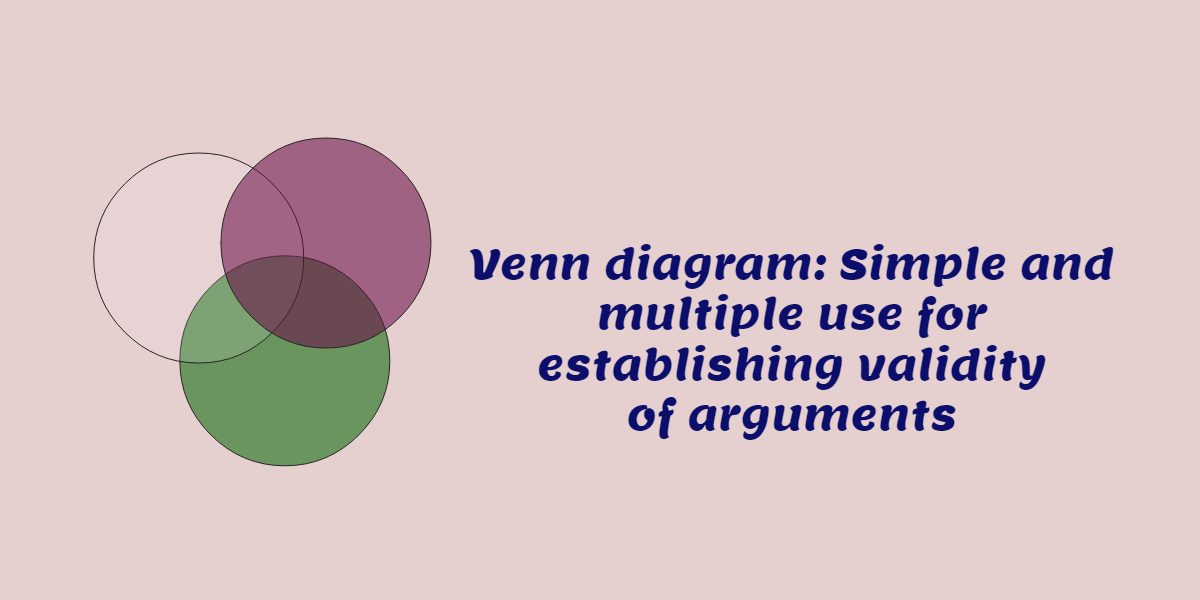 This topic brings out the important part of categorical syllogism, which helps to determine the validity of arguments. In this blog post, we have tried to cover the basic concepts of Venn Diagrams along with the steps of validating the arguments with the help of rules /sets of arguments.

The standard dictionary meaning of the argument is “Discussion where there is disagreement”.

Saying that an argument is valid does not mean that the conclusion is true: We verify the situation by an example. Consider two premises 1. All doctors are men, 2. My mother is a doctor. Then the valid argument “My mother is a man” is not a true conclusion.

We will verify valid and invalid arguments and conclusions with Venn diagram.

What are Venn diagrams?

A Venn diagram uses overlapping circles or other shapes to illustrate the logical relationships between two or more sets of items. Often, they serve to graphically organize things, highlighting how the items are similar and different.

Let’s first understand the concept of the validity of deductive arguments.

In other words, it is impossible to have a situation where:

(1) the premises of the argument are true, and

(2) the form of the argument is valid, and

(3) the conclusion is false.

The reason for this is very simple: the conclusion of a deductive argument does not contain any new information –it is already contained (in some implicit form) in the premises itself.

An example of an argument using deductive arguments:

Further, we can see from the above that the concept of validity is very important for deductive arguments. The conclusion is guaranteed to be true only if the form of the argument is valid and the premises are true.

So, what is validity? Questions of validity are purely formal. In testing for validity, we are not in any way concerned with the actual content of an argument. We are only concerned with its form –the way in which the premises are supposed to provide support for the conclusion.

This is usually performed with the help of abstraction step to the replacement of particular content with variables (In Most Cases Alphabets such as A, B, C, D…) and arrange them in the same specific form.

Now arranging the variable in the same form: –

Once we have the argument translated into the variable form we are going to ask a simple question: given that the premises are true, does the conclusion necessarily follow?

If you have categorical syllogisms, then you test this question by using Venn Diagrams. If you have compound statements using logical operators, then you use Truth Tables. We are going to look only at Venn Diagrams here, but the basic principle is the same: assuming that the premises are true, does the conclusion necessarily follow?

In most of the examination, the question asked from this topic will be based on 2 or 3 term arguments.

You must remember the old school formula –

So far in the NET Examination, we have seen question-based on CATEGORICAL SYLLOGISM so we will restrict our details for solving the Categorical Syllogism based question only.

Heads up! You can use various online available tool to create Venn diagram

Canva’s Venn diagram maker is the easiest way to make a Venn diagram online. Start by choosing a template – they’ve got hundreds of Venn diagram examples to choose from. With a suite of easy to use design tools, you have complete control over the way it looks.

First, translate the argument into a categorical structure. This involves identifying the categories that are being related to one another, and the manner of relation (Universal Affirmation, Universal Negation, Particular Affirmation, and Particular Negation).

The key to categorical syllogisms is to identify the categories being used. This is often seen that the given premise is not straight forward to identify and this require practice. On the whole, this process is rather simple and with practice, you will become an expert at it.

Shading and Putting and X

In step three we shade the area where all the ALL or NO claims found in the argument, note that you should always start with ALL and NO claims.

In step four we put ‘X’ in the area where the ‘Some’ or ‘Some are NOT’ claims found in the argument, note that you should always start with ALL and NO claims.

Now, you check for validity. Note, that you only diagram the premises. After having diagramed the premises, the conclusion should be evident. If it is not evident, if you have to do more work to make the conclusion evident, then the argument is clearly invalid.

So, Determining Validity with Venn Diagrams works through

If the conclusion is true in the diagram, the syllogism is valid; if not, not.

Let’s put them in Standard form and replace with variables

If both our premises are universal, as in this argument, we can diagram either premise first. So let’s diagram the minor premise:

But we see that the shaded region here was shaded automatically when we diagrammed the premises. So the argument is valid.

Heads up! There is another type of question-based on the formula of Sets and Venn Diagrams were asked previously so its worth to add here.

From the given problem above, it is a Venn Diagram Problem because it involves the intersection or mutual items of the sets. Consider the figure below