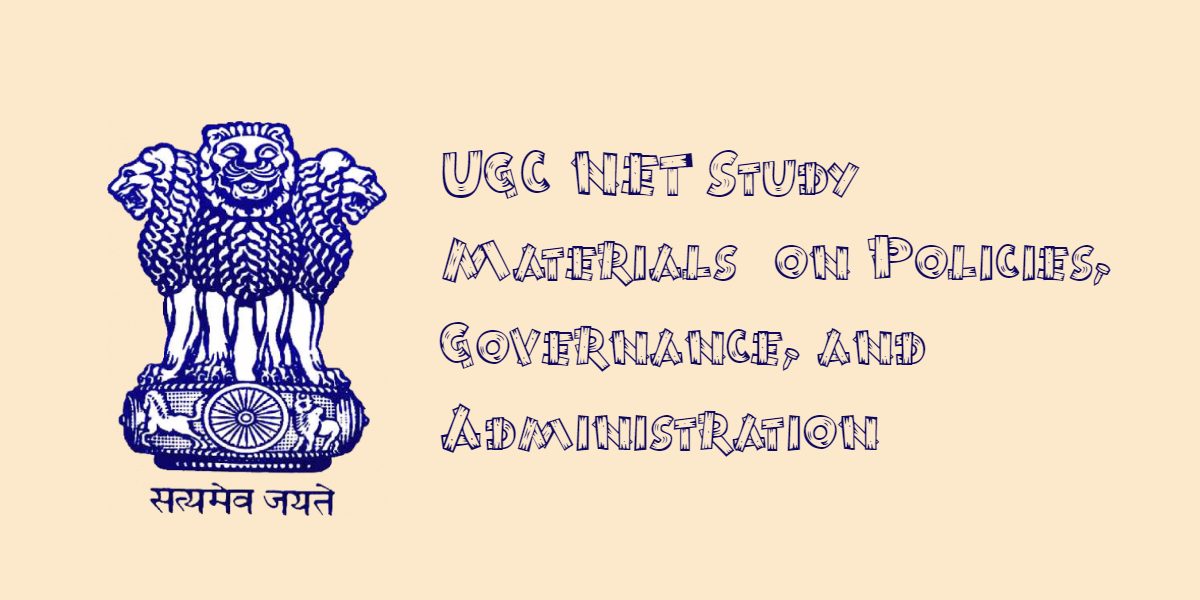 UGC NET Study Materials Based on Important Topics On Policies, Governance, and Administration

On the basis of last few exam trends we see that every year around 5-6 Question has been asked in UGC PAPER 1 from Study Material for Higher Education System, Governance, Administration.

Most of the Question were asked from Topics based on Higher Education, however questions were also asked based on Policies, Governance, and Administration.

To Cover the entire Policies, Governance Model and administration is beyond the scope of this article and also this is Vast topic for those who are preparing for the IAS Exam.  Most of the time 2-3 Question were asked based on below topics.

By end of this article you will have good understanding of above mentioned topics. Let’s start with important aspects from constitution of INDIA for UGC NET PAPER 1 exam.

The Constitution of India is the supreme law of India. It lays down the framework defining fundamental political principles, establishes the structure, procedures, powers and duties of government institutions and sets out fundamental rights, directive principles and the duties of citizens.

It is the longest written constitution of any sovereign country in the world. The nation is governed on the basis of this Constitution. B. R. Ambedkar is regarded as the chief architect of the Indian Constitution.

At the time of independence in August 15th 1947, the State of Jammu and Kashmir decided not to join either India or Pakistan. However, soon Pakistan attempted to annex the State military. Meanwhile, the Maharaja signed the “Instrument of accession” with India along with certain concessions for the autonomy of the State. article 370 in Part XXI of the Indian Constitution grants a special status to Jammu and Kashmir

The Indian constitution is the world’s longest constitution. At the time of commencement, the constitution had 395 articles in 22 parts and 8 schedules. It consists of almost 80,000 words. The Constitution, in its current form (September 2012), consists of a preamble, 25 parts containing 448 articles, 12 schedules, 5 appendices and 100 amendments, the latest of which came into force on 1 August 2015.

Various sources of our Constitution

WE, THE PEOPLE OF INDIA, having solemnly resolved to constitute India into a SOVEREIGN, SOCIALIST, SECULAR, DEMOCRATIC, REPUBLIC and to secure to all its citizens:-

EQUALITY of status and of opportunity; and to promote among them all

FRATERNITY assuring the dignity of the individual and the unity and integrity of the nation;

IN OUR CONSTITUENT ASSEMBLY this twenty-sixth day of November 1949, do HEREBY ADOPT, ENACT AND GIVE TO OURSELVES THIS CONSTITUTION.

Fundamental Duties in the Indian Constitution 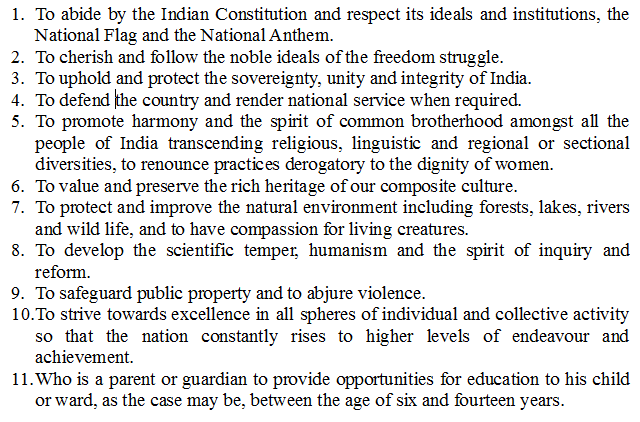 Impeachment of President: The President can be removed from office by a process of impeachment for
‘violation of the Constitution’. The impeachment charges can be initiated by either House of Parliament. These charges should be signed by one-fourth members of the House (that framed the charges), and a 14 days’ notice should be given to the President.

The executive powers and functions of the President are:

The President is an integral part of the Parliament of India, and enjoys the following legislative powers.

His prior recommendation or permission is needed to introduce certain types of bill in the Parliament. For
example, a bill involving expenditure from the Consolidated Fund of India, or a bill for the alteration of
boundaries of states or creation of a new state.

Absolute Veto: It refers to the power of the President to withhold his assent to a bill passed by the Parliament. The bill then ends and does not become an act. Usually, this veto is exercised in the following two cases:
With respect to private members’ bills; and With respect to the government bills when the cabinet resigns (after the passage of the bills but before the assent by the President) and the new cabinet advises the President not to give his assent to such bills.

The Vice-President occupies the second highest office in the country. He is accorded a rank next to the President in the official warrant of precedence. Election He is elected by the members of an electoral college consisting of the members of both Houses of Parliament.

To be eligible for election as Vice-President, a person should fulfil the following qualifications:

The oath of office to the Vice-President is administered by the President or some person appointed in that behalf by him.

The Vice-President holds office for a term of five years from the date on which he enters upon his office. However, he can resign from his office at any time by addressing the resignation letter to the President. He can also be removed from the office before completion of his term. A formal impeachment is not required for his removal. He can be removed by a resolution of the Rajya Sabha passed by an absolute majority.

The executive powers and functions of the Vice-President are:

The functions of Vice-President are twofold:

Powers and functions of Prime Minister

The powers and functions of Prime Minister can be studied under the following heads:

As the Constitution of India provides for a parliamentary system of government modelled on the British pattern, the council of ministers headed by the prime minister is the real executive authority is our politico-administrative system.

The principles of parliamentary system of government are not detailed in the Constitution, but two Articles (74 and 75) deal with them in a broad, sketchy and general manner. Article 74 deals with the status of the council of ministers while Article 75 deals with the appointment, tenure, responsibility, qualification, oath and salaries and allowances of the ministers.

The council of ministers consists of three categories: cabinet ministers, ministers of state, and deputy ministers.

So far we have covered below important topics …rest of other are separated into different post. You can read details on those following the link below.

Topics Covered in other article –