You are here:
UGC NET MCQ 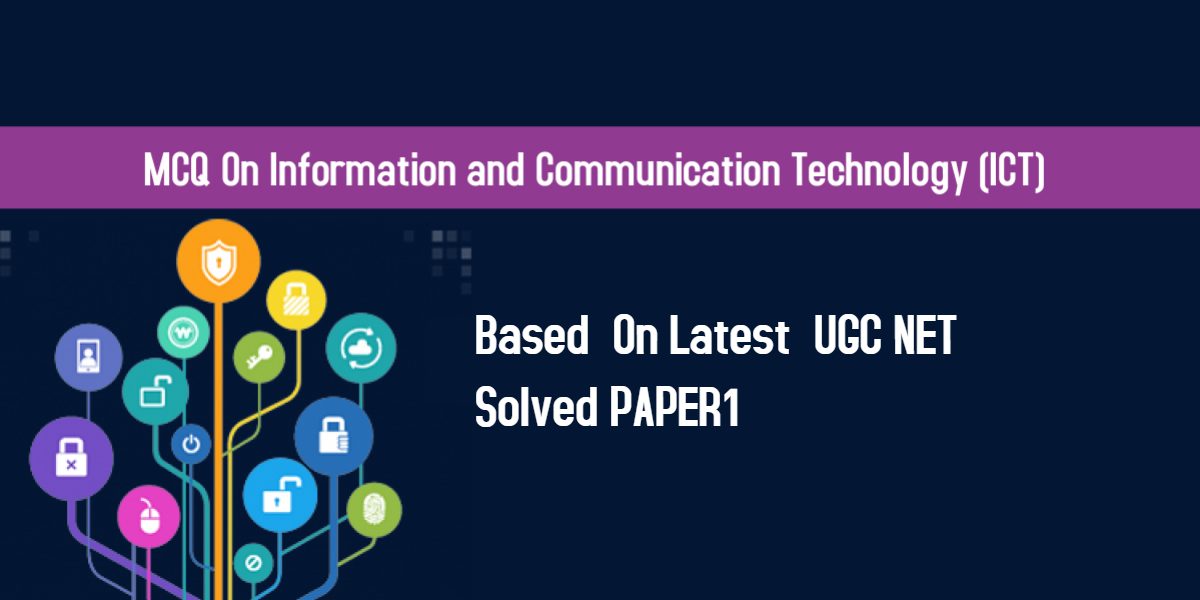 MCQ Based On Information and Communication Technology (ICT) Topic

This comprehensive MCQ ICT  is specially developed for the candidates of the UGC NET Exam (For Compulsory Paper-I) Teaching and Research Aptitude for the purpose of the practice of questions based on the pattern of the examination.

Please feel free to reach us in case you need more info or comment to highlight any issues with the above question set.

For sake of relevance, they are given in reverse order starting from the latest exam until the year 2006 Exam. There are instance were question were repeated and by changing sentence formation so keep attention to details

#5. Given below are two statements

Statement I: The use of ICT in organizing teaching-learning programmes in the universities has the potential to optimise the learning outcomes
Statement II: Formative assessment provides support to enhancing the quality of teaching-learning sessions

#6. Which of the following statements are correct?

A. N.K.N stands for New Knowledge Network
B. MOOCs are offline courses
C. National Supercomputing Mission is a Government of India initiative
D. Clock rate of CPU is measured in Gigabytes
E. Param Shivay is a super computer

#1. Which of the following is/are major issues arising out of the growing reliance on information technology?

#2. Match List-I with List-II in the context of computer networking:

#3. Select the option that includes file formats suitable for distributing sound files across the internet.

#4. which of the following statements is/are correct?

Answer:  Options look confusing however ans given was 3.

Which of the following is a type of malware intentionally inserted into a software system that
will set off a malicious function when specified conditions are met?
(1) Worm (2) Trojan
(3) Spyware (4) Logic bomb

Answer:  A logic bomb is a piece of code intentionally inserted into a software system that will set off a malicious function when specified conditions are met. For example, a programmer may hide a piece of code that starts deleting files (such as a salary database trigger), should he or she ever be terminated from the company.

Answer: P only; As Bluetooth is a protocol for wireless communication over short distances. It was developed in the 1990s, to reduce the number of cables. Devices such as mobile phones, laptops, PCs, printers, digital cameras and video game consoles can connect to each other, and exchange information. This is done using radio waves. It can be done securely. Bluetooth is only used for relatively short distances, like a few metres.

Answer: JPEG (/ˈdʒeɪpɛɡ/ JAY-peg) is a commonly used method of lossy compression for digital images, particularly for those images produced by digital photography. Rest all others are Video file formate.

Answer: Bcc stands for blind carbon copy which is similar to that of Cc except that the Email address of the recipients specified in this field do not appear in the received message header and the recipients in the To or Cc fields will not know that a copy sent to these address.

Answer: A liquid-crystal display (LCD) is a flat-panel display or other electronically modulated optical devices that uses the light-modulating properties of liquid crystals. Liquid crystals do not emit light directly, instead of using a backlight or reflector to produce images in color or monochrome.

Which of the following is an example of proprietary system software?
(1) Linux
(2) Microsoft Internet explorer
(3) Microsoft office
(4) Microsoft windows

Answer: Proprietary software is any software that is copyrighted and bears limits against use, distribution and modification that are imposed by its publisher, vendor or developer. Proprietary software remains the property of its owner/creator and is used by end-users/organizations under predefined conditions.

With respect to computers, which one of the following best describes phishing?
(1) A malicious program installed on a system that stays concealed to avoid detection.
(2) A method of bypassing normal authentication procedures over a connection to a network.
(3) A type of unsolicited bulk email of identical messages sent to numerous recipients.
(4) An attempt to acquire sensitive information for malicious reasons, by masquerading as a
trustworthy entity.

Answer: Phishing is the fraudulent attempt to obtain sensitive information such as usernames, passwords and credit card details by disguising oneself as a trustworthy entity in an electronic communication.

Answer: A local area network, or LAN, consists of a computer network at a single site, typically an individual office building. A LAN is very useful for sharing resources, such as data storage and printers. LANs can be built with relatively inexpensive hardware, such as hubs, network adapters and Ethernet cables.

A/An ________ is a computer program that spreads by inserting copies of itself into other
executable code or documents.
(1) Operating system
(2) Computer Virus
(3) Firewall
(4) Anti-virus

Answer: Viruses. A computer virus is software usually hidden within another seemingly innocuous program that can produce copies of itself and insert them into other programs or files, and that usually performs a harmful action (such as destroying data).

Which of the following is not a/an web browser?
(1) Internet Explorer
(2) Mozilla Firefox
(3) Google Chrome
(4) Yahoo

As you all know DEC 2018  exam was Online test and question papers were not released by NTA…so we have covered the memory-based question based on the feedback of students.

Which one of the following processes is the main task for the computer in mapping the geographical data?

Answer:  Options look confusing however ans given was 3.

In computer terminology which of following describe device drivers

Answer:  3- Device drivers are software you install to work with hardware with OS

Which of the following is not true about RAM?

Which one of the following would not be considered as a form of secondary storage?

What does the acronym WAN stand for?

FTP is an acronym for–

Which of the following statements, regarding the term ICT is/are TRUE ?
P : ICT is an acronym that stands for Indian Classical Technology.
Q : Converging technologies that exemplify ICT include the merging of audio-visual,
telephone and computer networks through a common cabling system.
(1) P only
(2) Q only
(3) P and Q
(4) Neither P nor Q
Answer: (2)

A new Laptop has been produced that weighs less, is smaller and uses less power than
previous Laptop models. Which of the following technologies has been used to accomplish this ?
(1) Universal Serial Bus Mouse
(2) Faster Random Access Memory
(3) Blu Ray Drive
(4) Solid State Hard Drive
Answer: (4)

Which of the following represents billion characters?
(1) Megabytes
(2) Kilobytes
(3) Gigabytes

Answer: (3)
DVD technology uses an optical media to store the digital data. DVD is an acronym for

33.’ ‘www’ stands for
(A) work with web
(B) word wide web
(C) world wide web
(D) worth while web
Answer: (C)
34. A hard disk is divided into tracks which is further subdivided into
(A) Clusters (B) Sectors (C) Vectors (D) Head
Answer: (B)
35. A computer program that translates a program statement by statement into machine language is called a / an
(A) Compiler (B) Simulator (C) Translator (D) Interpreter
Answer: (D)
36. A Gigabyte is equal to
(A) 1024 Megabytes
(B) 1024 Kilobytes
(C) 1024 Terabytes
(D) 1024 Bytes
Answer: (A)
37. A Compiler is software which converts
(A). Characters to bits.
(B) High level language to machine language.
(C) Machine language to high level language
(D) Words to bits
Answer: (B)
38. Virtual memory
(A) an extremely large main memory.
(B) an extremely large secondary memory.
(C) an illusion of extremely large main memory
(D) a type of memory used in super computers.
Answer: (C)

80. What do you need to put your web pages on the www ?
(A) a connection to internet (B) a web browser (C) a web server (D) all of the above
Answer: (D)
81. Which was the first company to launch mobile phone services in India ?
(A) Essar (B) BPL (C) Hutchison (D) Airtel
Answer: (D)
82. Chandrayan I was launched on 22nd October, 2008 in India from :
(A) Bangalore (B) Sri Harikota (C) Chennai (D) Ahmedabad
Answer: (B)
83. What is blog?
(A) Online music
(B) Intranet
(C) A personal or corporate website in the form of an online journal
(D) A personal or corporate Google search
Answer: (C)
84. Which is not online Indian Matrimonial website ?
(A) www.jeevansathi.com (B) www.bharatmatrimony.com
(C) www.shaadi.com (D) www.u.k.singlemuslim.com
Answer: (D)

100. On the keyboard of computer each character has an “ASCII” value which stands for :
(A) American Stock Code for Information Interchange
(B) American Standard Code for Information Interchange
(C) African Standard Code for Information Interchange
(D) Adaptable Standard Code for Information Change
Answer: (B)
101. Which part of the Central Processing Unit (CPU) performs calculation and makes decisions :
(A) Arithematic Logic Unit (B) Alternating Logic Unit
(C) Alternate Local Unit (D) American Logic Unit
Answer: (A)
102. “Dpi” stands for :
(A) Dots per inch (B) Digits per unit
(C) Dots pixel inch (D) Diagrams per inch
Answer: (A)
103. The process of laying out a document with text, graphics, headlines and photographs is involved in
(A) Deck Top Publishing (B) Desk Top Printing
(C) Desk Top Publishing (D) Deck Top Printing
Answer: (C)
104. Transfer of data from one application to another line is known as :
(A) Dynamic Disk Exchange (B) Dodgy Data Exchange
(C) Dogmatic Data Exchange (D) Dynamic Data Exchange
Answer: (D)