Mass-Media and Society | New Topic Based on Latest Syllabus

You are here:
Communication 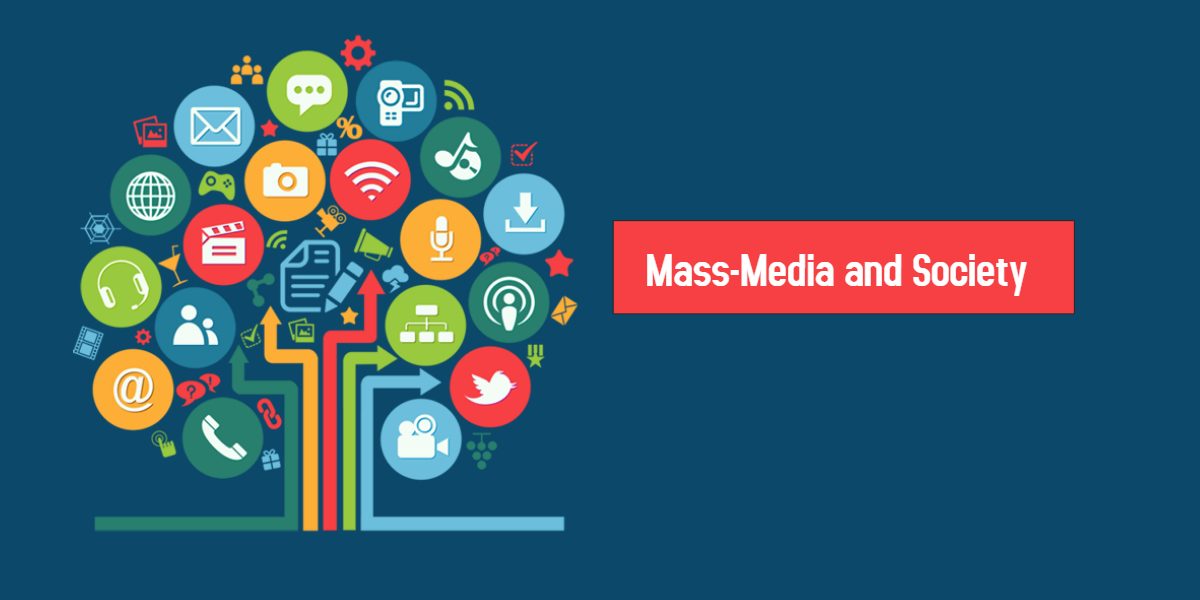 UGC NET Study materiel on Communication Topics for NET Exam has been covered entirely based on topics provided in the syllabus. In the 5 Parts series which can be referred using below, the first four parts contain important short study notes useful for your paper 1 preparation while the 5th part contains solved question papers of last almost 12 years MCQ Question.

Please sequentially go through them to understand them in better ways.

Media is the reflection of our society and it depicts what and how society works. Media, either it is printed, electronic or the web is the only medium, which helps in making people informed. It also helps in entertaining the public, educate and make people aware of the current happenings.

There are different media involved in the process of mass communication. They reach every corner of the world and are very powerful. They invade even the privacy of our bedrooms. They inform, educate, entertain and persuade. They also help in the transmission of culture and perform the job of surveillance of society.

They are the mass media. The major functions of mass communication are that it informs, enriches, educates and entertains.

Social media is becoming one of the most popular and most accessed media of communication these days. Social media has brought different people from the different geographical area on one platform on which they can share their feeling, ideas, emotions, information and much more.

With the advancement of science and technology, the world has come close to each other. Today people don’t have to wait for the dissemination process but the condition is such that every social media user has become a source of information on their own.

The daily news and views to which the social media user comes across to cover a wide range of topics. These topics or subjects are related to the happenings of our surrounding. People can like, show emotions through the list of emoticons or even comment accordingly.

The social media act as an umbrella that constitutes a variety of interesting features that have our life very easier. Features of tagging friends, location sharing, photo and video uploads, message chatting, video calling, searching friends etc have made our life more engaging.

What is Mass Communication & mass media

Mass communication is the term used to describe the academic study of various means by which individuals and entities relay information to large segments of the population all at once through mass media.

Both mass communication and mass media are generally considered synonymous for the sake of convenience. The media through which messages are being transmitted include radio, TV, newspapers, magazines, films, records, tape recorders, video cassette recorders, internet, etc. and require large organizations and electronic devices to put across the message.

What are the Elements & Characteristics of Mass communication

We require a sender, a message, a channel and a receiver for communication to occur. Further, there is feedback, which is the response or reaction of the receiver,  which comes back to the sender through the same or some other channel. Another element, which plays an important role in communication, is noise or the disturbances.

It is observed that the term mass communication must have at least five aspects:

Mass media can be classified according to their physical form, the technology involved and the nature of the communication process.

The general classification on this basis is as follows:

Traditional Media- The traditional arts and folk arts combine several art forms like dance, music, songs and theatre to attract audiences. The performances are spontaneous and most often made on the spot.

Electronic Media- The history of electronic media starts with the invention of cinematography by Lumiere Brothers who conducted the premiere show of cinema in 1895. Later the radio was invented by Guglielmo Marconi. The first radio station was set up in Pittsburg, New York and Chicago in the 1920s.

New Media/Social Media & Others- Internet and the World Wide Web opened up several new avenues for mass communication which include e-mail, websites, podcasts, e-books, blogging, social networking sites, Internet Protocol Television, Internet radio and the like. These kinds of online and digital means of producing, transmitting and receiving messages are called new media.

Social media has brought different people from the different geographical area on one platform on which they can share their feeling, ideas, emotions, information and much more.

In a society like ours, mass media have a responsible role to play in fostering democracy, plurality and communal harmony through the functions listed below.

After having a discussion on these ideal functions of mass media in any society, you will be able to analyze how our mass media perform their function.

Mass media carry a lot of information which are essential for our day to day life. We get examination results, weather forecasts, current affairs, traffic regulations, alerts, precautions, government policies etc. from mass media. The core of the media’s information function is performed by the media content called news. Good media try to carry accurate, objective and complete information since biased or incomplete reports will keep the audience away from the media.

Vyas Channel of the Consortium of Educational Communication under the University Grants Commission and Gyandarshan of Doordarshan are some of such efforts. The Gyanvani is an educational radio channel of Indira Gandhi National Open University (IGNOU).

We all need the entertainment to break the monotony of our hectic, stressful life and divert our attention from the troubles and tensions. All media have entertainment content. Newspapers publish cartoons, comics, puzzles and special weekend supplements. The lion’s share of magazine content such as short stories, novels, satires and comics are also intended to entertain the audience

Socialization means empowering people to acquire norms and experiences of the group as a whole, to maintain cultural consensus and communal harmony. It is through mass media that we know the cultural and social norms of various groups in our society.

Based on this information, individuals honour others and behave according to the common values and thus create an integrated society.

If you analyze the mass media, be it television or newspapers, most of their content, especially news, is centred on politics in our society. We see our leaders criticize officials and political leaders and advocate for better living conditions during panel discussions on television. Similarly, journalists expose corruption, show up developments, and condemn or praise political activities considering their merits.

These actions of the media make our democracy vibrant. Thus mass media assume a key role in setting the agenda for the entire political system and policymaking by forming public opinion on various issues. This process is called an agenda-setting function.

This function is as important as that of other estates of democracy – the legislature, the bureaucracy and the judiciary. Thus the media is regarded as the Fourth Estate of Democracy.

Mass media are the bridge between our past and present. They report day to day affairs which will become the history of tomorrow. The best records of modern history are newspapers of yesteryears. We get our cultural tradition from history and we follow the best of them. In keeping our culture flowing, the media play a vital role. It focuses on the genuine aspects of our culture and points out the undesirable trends.

Mass media report problems faced by people in different walks of life and make the administrators aware of them. Media also make people aware of their rights, the details of government subsidies, development policies etc. They point out the merits and demerits of certain projects. In short, the media support development either being the advocates of government-sponsored development or critics of development projects which needs to be amended.

The mass media have an important role in a modern democratic society as the main channel of communication.

The population relies on the news media as the main source of information and the basis on which they form their opinions and voting decisions. Any selection of messages in the mass media will thus have a profound effect on the entire society.

Competition has become increasingly keen in the area of the mass media as they keep fighting for the attention of the readers, listeners, and TV-viewers.

The life and death of each newspaper and TV station are at stake here when the income from advertising and sponsoring is proportional to the number of readers or viewers.

The printed media have problems competing with electronic media as sources of news. To survive, they are increasingly turning to other strategies such as entertainment, titillation, scandal-mongering, and spreading fear and spending fewer resources on serious researching of news.

This is not only about the survival of the fittest of the news media; it is also about the cultural selection and political selection.

How mass-media Influence us

The degree of influence depends on the availability and pervasiveness of media. traditional mass media still have great influence over our lives. Books once were supremely influential because they came first before newspapers, magazines, radio or television.

Newspapers and magazines became great influences after they were developed. Sound recordings and film were and still are influential. Radio and then television was very influential. As the 20th century closed, TV exposed us to untold numbers of images of advertising and marketing, suffering and relief, sexuality and violence, celebrity, and much more.

New and influential media-distribution channels have appeared in the 21st century. Delivered via the World Wide Web across the Internet, we are influenced daily by blogs, wikis, social networks, virtual worlds and myriad forms of content sharing.

We have put our trust on the media as an authority to give us news, entertainment and education. However, the influence of mass media on our kids, teenagers and society is so big that we should know how it works.

The media makes billions of dollars with the advertising they sell and that we are exposed to, every single moment. We buy what we are told to buy by the media.

After seeing thousands of advertising’s we make our buying decisions based on what we saw on tv, newspapers or magazines. These are the effects of mass media especially in teenagers, they buy what they see on tv, what their favourite celebrity advertise and what is acceptable by society based on the fashion that the media has imposed on them.

Let us sum up

In this blog, you have learnt that mass media is an inevitable part of our society. Mass media is all around us in the form of newspapers, magazines, books, radio, television, film and new media. Their characteristics, functions and convergence are also dealt with in detail. They give us a lot of information, educate the masses, entertain our society through various means and also set some social agenda. Mass media are an essential entity for a democratic political system.

They are also an effective tool for creating public opinion and support public demands. Mass media reveal the social realities before their audience. They help in transmitting culture from one generation to another. We also discussed the need for every citizen to be media literate to use media in a sophisticated and responsible manner.