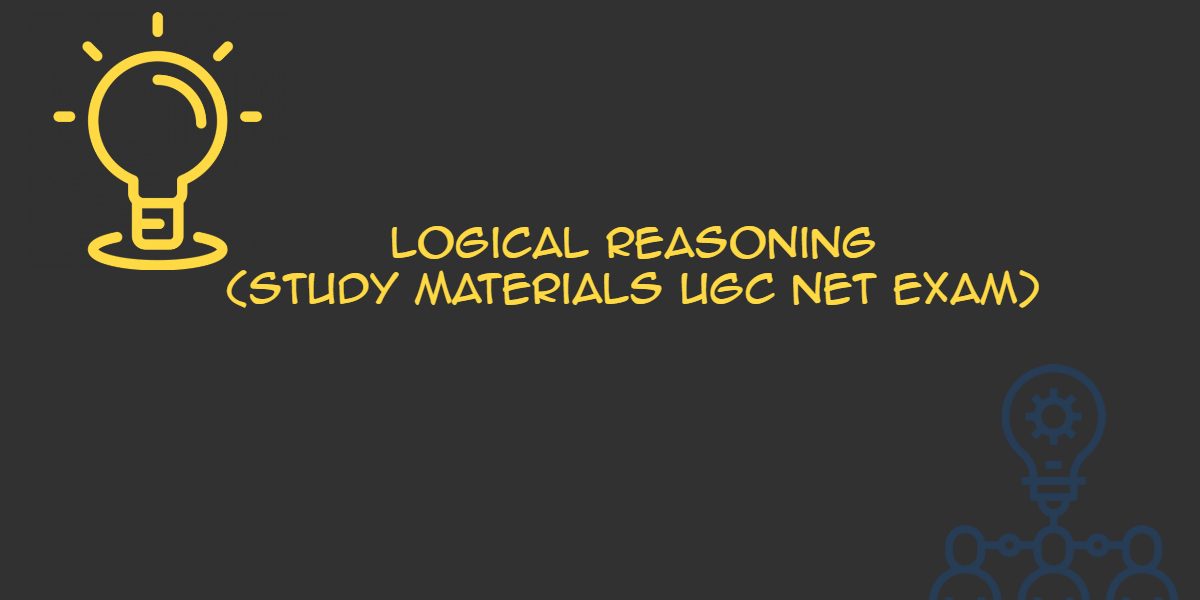 Logical Reasoning Syllabus! – Logical Reasoing NET Syllabus needs your attention, and it ’s super important as sometimes Questions were asked from a mixture of topics based on below Board Categories!

In this section, we will look at the structure of an argument

“I see what your premises are,” says the philosopher, “and I see your conclusion. But I just don’t see how you get there. I don’t see the argument.”

What is the argument?

– An argument is a claim defended with reasons. It is composed of a group of statements with one or more statements (premises) supporting another statement (conclusion).

Arguments are the basis of persuasive communication. They are combinations of statements made that are intended to change the minds of other people.

All arguments have structure, which can be either deliberately designed or maybe discovered through analysis.

At its simplest, an argument has premises and a conclusion.

Main components in an argument. (a) Premises, (b) Conclusion:

– A simple argument must have a conclusion and at least two premises.
– Premises or propositions are statements that directly support the conclusion.
– A conclusion is what an author or an individual wants me to believe, accept or do.

Premise
A premise (or premiss) of an argument is something that is put forward as a truth, but which is not proven. Although it is not proven, it is assumed to be true (although how universally accepted this truth is maybe another matter).

It is hot in here.

This is a beautiful car.

The people of this town are angry.

If you want to attack another person’s argument, you can challenge the truth of their premises. If you are making an argument, you should be ready to defend any of your premises.

The more complex the premise, the more opportunity there is to challenge it, so if you expect a challenge, keep your premises both short and non-controversial.

As premises are the building blocks of the argument, there may well be two or more premises in any argument.

Conclusion
The conclusion (or claim) is the statement with which you want the other person to agree. It is drawn from the premises of the argument, of which there may be many.

We need to get out.

You should buy this car.

The new housing should be sited elsewhere.

A useful way of spotting a conclusion is that it may well be a statement of necessity, saying what must or should happen. It may well be framed to persuade the other person to do something or make some decision.

A particular aspect of the logical argument is that inferential statements have true-false qualities — that is, they are either true or false and nothing in between. Thus a sentence can contain many statements.

Inferential arguments seek to prove. Thus commands, explanations and other statements may not directly add to the inference, although they may be a useful component of persuasion.

Based on the above fact generally, three types of Question were asked in UGC NET exam in the logical reasoning section –

The GOI  has decided to pay compensation to the tune of Rs. 10  lakh to the family members of those who are killed in major railway accidents.

The government has enough funds to meet the expenses due to compensation.
There may be a reduction in incidents of railway accidents in the near future.

Heads up! These type of Question are commonly asked you need to give attention to details. You might not able to identify that given assumption is implicit or not in the first few attempts however one you practise more questions based on the same pattern you will be able to identify them.

There is no shortcut to solving these problems.

If you consider the statement given that Gov of India has decided to pay 10 lakh compensation for railway accidents that means it must have been discussed in minister councils and subsequently rules has been provisioned after considering the amount that might need to allocate for this fund.

Means- The government has enough funds to meet the expenses due to compensation.

However, The no of train incidents are unpredictable and this cant guarantee that there will be a reduction in incidents of railway accidents in the near future.

Hence – the only assumption I is implicit

Each question given below consists of a statement, followed by two arguments numbered I and II. You have to decide which of the arguments is a ‘strong’ argument and which is a ‘weak’ argument.

* (A) If only argument I is strong

* (B) If only argument II is strong

Usually, in these questions, a statement is given which is followed by two arguments. An individual is required to differentiate between strong and weak arguments.

You will see many different types of questions in this section. Usually, confusing questions will be asked. The arguments that will be provided will generally be contrary to each other.

You have to choose the strong argument which satisfies the Statement.

Should taxes on colour television be further increased?

Taxes on an item cannot be increased or decreased based on the financial position of the people who buy it. So, both arguments I and II do not hold strong.

Should India become a permanent member of the UN’s Security Council?

A peace-loving nation like India can well join an international forum which seeks to bring different nations on friendly terms with each other. So, the argument I hold strong.

Argument II highlights a different aspect. The internal problems of a nation should not debar it from strengthening international ties. So, argument II is vague.

Paper Pattern –  Questions are givens with the statement and you need to identify which of inference/Conclusion is correct.

The government has spoiled many top-ranking financial institutions by appointing bureaucrats as Directors of these institutions.

According to the statement, the Government has spoiled financial institutions by the appointing bureaucrats as Directors. This means that only those persons should be appointed as Directors who are experts in finance and are acquainted with the financial work of the institute. So, both I and II follow.

An organization like UNO is meant to maintain peace all over and will always serve to prevent conflicts between countries. So, its role never ends. So, the argument I do not hold. Also, lack of such an organization may in future lead to increased mutual conflicts and international wars, on account of lack of a common platform for mutual discussions. So, argument II holds.

Please feel free to reach the ugcnetpaper1 team at – ugcnetpaper@gmail.com in case you have any question and doubt about this.

You can also comment below our team will be more than happy to answer your queries.