Institutions of higher learning and education in ancient India

Heads up! This topic needs your attention, as the topic is very vast and you will always find surprising question based on this unit.

{Click on below links for complete notes of Higher Education System, Solved Question based on this unit is also covered to check your progress at the end. }

Some other important topics which are interrelated to above-

Introduction to education in ancient India

Sages and scholars imparted education orally. Palm leaves and barks of trees were used for writing.

In ancient India, both formal and informal ways of education system existed. Indigenous education was imparted at home, in temples, pathshalas, tols, chatuspadis and gurukuls.

There were people in homes, villages and temples who guided young children in imbibing pious ways of life. Temples were also the centres of learning and took interest in the promotion of knowledge of our ancient system. Students went to viharas and universities for higher knowledge.

Teaching was largely oral and students remembered and meditated upon what was taught in the class.

Ancient Indian Education had been evolved strictly on the foundations of Indian epistemological and philosophical traditions. The idea of the ephemerality of life and the world, the concept of ultimate death and the futility of mundane pleasures had provided them with a special angle of vision. The entire educational tradition originated in these 4 principles.

Thus, ancient Indian educational system was developed in terms of the needs of the individual and that of the society and therefore, its efflorescence was natural. It had a definite ideal and a definite mission. The ancient educational centers, situated amidst fauna and flora and beauties of nature were the perennial and inexhaustible fountainheads of Indian civilization and culture.

The Upanishads, the Smritis and the Puranas, all acknowledge the superiority of Vedas.

The Vedas occupy a very important place in the Indian life. The 6 basis of Indian culture lies in the Vedas, which are four in number Rigveda, Samaveda, Yajurveda and Atharvaveda.

The Curriculum of Vedic Education, Methods and key aspects of Vedic era

Education in the Sutras and Epics 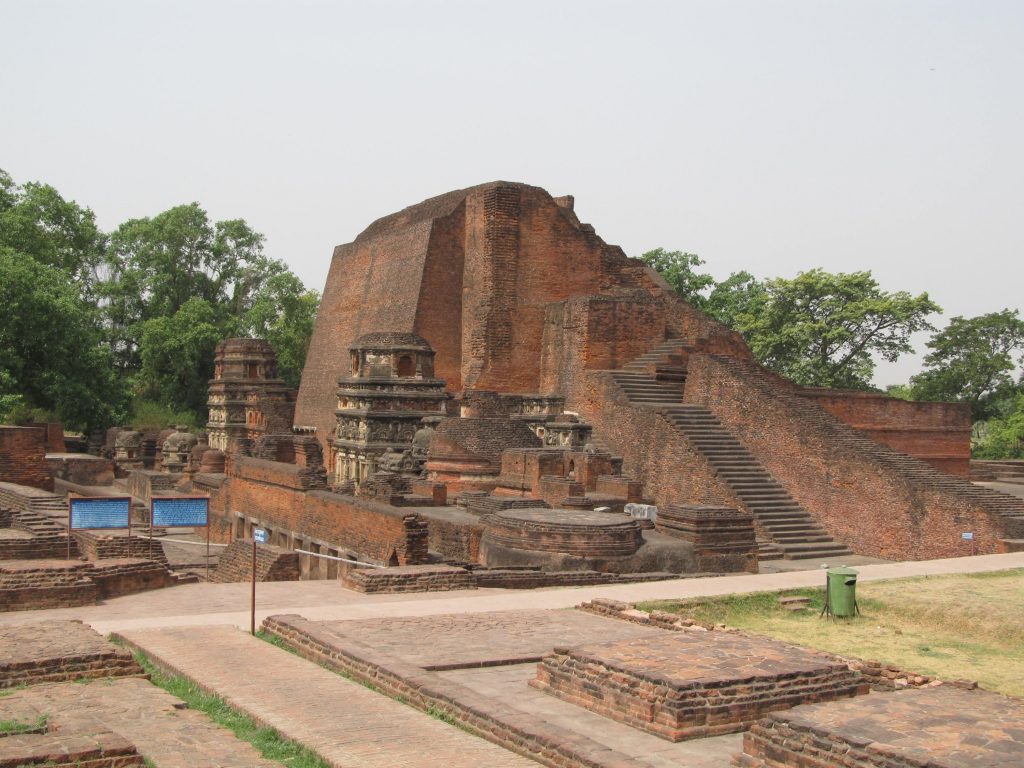 Now we shall describe some important centers of learning of the Buddhist period. Of these institutions, Taxila, Nalanda, Valabhi, Vikramshila, Odantapuri, Nadia, Mithila and Jagaddala require special mention.

In ancient times, Takshashila was a noted centre of learning, including religious teachings of Buddhism, for several centuries. It continued to attract students from around the world until its destruction in the 5th century CE.

Its fame rested on the University, where Chanakya is said to have composed his Arthashastra. Archaeologist Alexander Cunningham discovered its ruins in the mid-19th century.

It was an early Buddhist centre of learning. Well known graduates of this university include Chanakya, Panini, Charaka, Vishnu Sharma, Jivaka etc. This is the world’s oldest university.

In the province of Bihar, situated at a distance of 40 miles southwest of modern Patna and seven miles north of Rajgriha, Nalanda was a famous cultural and educational center of Northern India. –

Nalanda was an ancient center of higher learning in Bihar from 427 BCE to 1197 CE. The university was established in the 5th century CE.

A historian writes, “The University of Nalanda was the educational center of international moral comparable in the universalism of its thought, the wide range of its studies, the international character of its community to the greatest universities of modern time like Oxford, Cambridge, Paris and Harvard.”

The Vihara of Vikramshila was established by the famous Emperor Dharampala of Pal dynasty in the 8th century in Northern Magadh at a beautiful hill on the bank of the river Ganges.

In the Upanishadic age Mithila became a prominent seat of Brahmanical system of education. It was named as Videha. Raja Janak used to hold religious conferences, wherein learned Rishis and pandits took part in religious discussions.

Nadia was formerly called Navadweep. It is situated at the confluence of Ganga and Jalangi rivers in Bengal. It was the center of trade and commerce as well as learning and culture.

The study of the Education system in Vedic period and Brahmanical Educational system makes it clear that in those days the residence of the teachers (Gurus) were the educational institutions called Gurukulas. There the teacher and the taught lived together as the members of the single family.

In Ancient India, in Vedic and Buddhist periods, well organized educational institutions like that of modern age had not come into being. In those days, some monasteries and huge sacred places had been established. It is said that the learned persons from different places used to assemble there and debates.

Most of the universities are seen to have ended around 12th century. The destruction of these centers and other places across northern India was responsible for the loss of ancient Indian knowledge.

16 Digital Initiative in Higher Education You Must Know

Evolution of higher learning and research in Post Independence India-[Updated]

Top 10 Important Government Bodies You Must Know About

Challenges in Higher Education in India