Please find below 60 MCQ of Teaching Aptitude Question Based on UGC NET Solved Paper 1 June 2010 UGC NET exam. Answer of All those has been provided below the question.

2. The primary responsibility for the teacher’s adjustment lies with
(A) The children
(B) The principal
(C) The teacher himself
(D) The community

See Answer
(C) The teacher himself

4. Research has shown that the most frequent symptom of nervous instability among teachers is
(A) Digestive upsets
(B) Explosive behaviour
(C) Fatigue
(D) Worry

5. Which one of the following statements is correct ?
(A) Syllabus is an annexure to the curriculum.
(B) Curriculum is the same in all educational institutions.
(C) Curriculum includes both formal, and informal education.
(D) Curriculum does not include methods of evaluation.

6. A successful teacher is one who is
(A) Compassionate and disciplinarian
(B) Quite and reactive
(C) Tolerant and dominating
(D) Passive and active

See Answer
(A) Compassionate and disciplinarian

Read the following passage carefully and answer the questions 7 to 12.
The phrase “What is it like ?” stands for a fundamental thought process. How does one go about observing and reporting on things and events that occupy segments of earth space ? Of all the infinite variety of phenomena on the face of the earth, how does one decide what phenomena to observe ? There is no such thing as a complete description of the earth or any part of it, for every microscopic point on the earth’s surface differs from every other such point. Experience shows that the things observed are already familiar, because they are like phenomena that occur at home or because they resemble the abstract images and models developed in the human mind. How are abstract images formed ? Humans alone among the animals possess language; their words symbolize not only specific things but also mental images of classes of things. People can remember what they have seen or experienced because they attach a word symbol to them.
During the long record of our efforts to gain more and more knowledge about the face of the earth as the human habitat, there has been a continuing interplay between things and events. The direct observation through the senses is described as a percept; the mental image is described as a concept. Percepts are what some people describe as reality, in contrast to mental images, which are theoretical, implying that they are not real. The relation of Percept to Concept is not as simple as the definition implies. It is now quite clear that people of different cultures or even individuals in the same culture develop different mental images of reality and what they perceive is a reflection of these preconceptions. The direct observation of things and events on the face of the earth is so clearly a function of the mental images of the mind of the observer that the whole idea of reality must be reconsidered. Concepts determine what the observer perceives, yet concepts are derived from the generalizations of previous percepts. What happens is that the educated observer is taught to accept a set of concepts and then sharpens or changes these concepts during a professional career. In any one field of scholarship, professional opinion at one time determines what concepts and procedures are acceptable, and these form a kind of model of scholarly behaviour.

7. The problem raised in the passage reflects on
(A) thought process (B) human behaviour (C) cultural perceptions (D) professional opinion

8. According to the passage, human beings have mostly in mind
(A) Observation of things
(B) Preparation of mental images
(C) Expression through language
(D) To gain knowledge

See Answer
(A) A mental image

See Answer
(B) The Human Habitat

12. Percept means
(A) Direct observation through the senses
(B) A conceived idea
(C) Ends of a spectrum
(D) An abstract image

See Answer
(A) Direct observation through the senses

13. Action research means
(A) A longitudinal research
(B) An applied research
(C) A research initiated to solve an immediate problem
(D) A research with socioeconomic objective

14. Research is
(A) Searching again and again
(B) Finding solution to any problem
(C) Working in a scientific way to search for truth of any problem
(D) None of the above

15. A common test in research demands much priority on
(A) Reliability
(B) Useability
(C) Objectivity
(D) All of the above

See Answer
(D) All of the above

16. Which of the following is the first step in starting the research process ?
(A) Searching sources of information to locate problem.
(B) Survey of related literature
(C) Identification of problem
(D) Searching for solutions to the problem

17. If a researcher conducts a research on finding out which administrative style contributes more to institutional effectiveness ? This will be an example of
(A) Basic Research
(B) Action Research
(C) Applied Research
(D) None of the above

19. In communication, a major barrier to reception of messages is
(A) audience attitude
(B) audience knowledge
(C) audience education
(D) audience income

20. Post-modernism is associated with
(A) newspapers
(B) magazines
(C) radio
(D) television

22. In communication, the language is
(A) the non-verbal code
(B) the verbal code
(C) the symbolic code
(D) the iconic code

See Answer
(B) the verbal code

27. If water is called food, food is called tree, tree is called earth, earth is called world, which of the following grows a fruit ?
(A) Water  (B) Tree (C) World  (D) Earth

32. Lakshmana is a morally good person because
(A) he is religious
(B) he is educated
(C) he is rich
(D) he is rational

See Answer
(D) he is rational

34. Certainty is
(A) an objective fact
(B) emotionally satisfying
(C) logical
(D) ontological

See Answer
(A) an objective fact

Questions from 35 to 36 are based on the following diagram in which there are three intersecting circles I, S and P where circle I stands for Indians, circle S stands for scientists and circle P for politicians. Different regions of the figure are lettered from a to g. 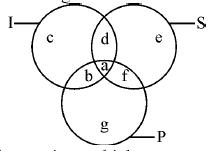 37. The population of a city is plotted as a function of time (years) in graphic form below :

In the following chart, the price of logs is shown in per cubic metre and that of Plywood and Saw Timber in per tonnes. Study the chart and answer the following questions 38, 39 and 40. 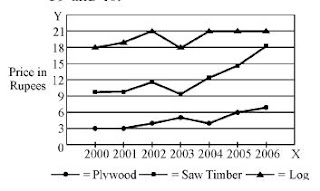 38. Which product shows the maximum percentage increase in price over the period ?
(A) Saw timber  (B) Plywood  (C) Log  (D) None of the above

41. Which one of the following is the oldest Archival source of data in India ?
(A) National Sample Surveys
(B) Agricultural Statistics
(C) Census
(D) Vital Statistics

46. Which one of the following is different from other members ?
(A) Google
(B) Windows
(C) Linux
(D) Mac

48. Computers on an internet are identified by
(A) e-mail address
(B) street address
(C) IP address
(D) None of the above

49. The Right to Information Act, 2005 makes the provision of
(A) Dissemination of all types of information by all Public authorities to any person.
(B) Establishment of Central, State and District Level Information Commissions as an appellate body.
(C) Transparency and accountability in Public authorities.
(D) All of the above

See Answer
(D) All of the above

50. Which type of natural hazards cause maximum damage to property and lives ?
(A) Hydrological
(B) Hydro-meteorological
(C) Geological
(D) Geo-chemical

51. Dioxins are produced from
(A) Wastelands
(B) Power plants
(C) Sugar factories
(D) Combustion of plastics

57. Which option is not correct ?
(A) Most of the educational institutions of National repute in scientific and technical sphere fall under 64th entry of Union list.
(B) Education, in general, is the subject of concurrent list since 42nd Constitutional Amendment Act 1976.
(C) Central Advisory Board on Education (CABE) was first established in 1920.
(D) India had implemented the right to Free and Compulsory Primary Education in 2002 through 86th Constitutional Amendment

See Answer
(A) Most of the educational institutions of National repute in scientific and technical sphere fall under 64th entry of Union list.

See Answer
(A) It is celebrated on 5th September every year.

60. Deemed Universities declared by UGC under Section 3 of the UGC Act 1956, are not permitted to
(A) offer programmes in higher education and issue degrees.
(B) give affiliation to any institute of higher education.
(C) open off-campus and off-shore campus anywhere in the country and overseas respectively without the permission of the UGC.
(D) offer distance education programmes without the approval of the Distance Education Council.

See Answer
(C) open off-campus and off-shore campus anywhere in the country and overseas respectively without the permission of the UGC.
Continue Reading

This website uses cookies to improve your experience. We'll assume you're ok with this, but you can opt-out if you wish. Accept Read More

Thanks for subscribing! Please check your email for further instructions.