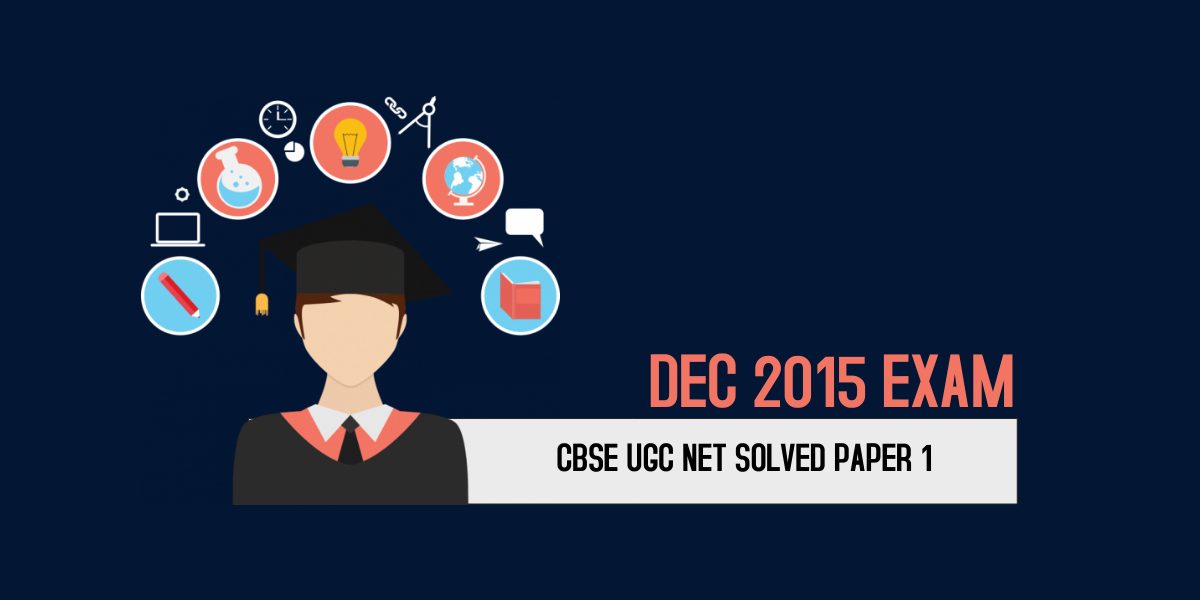 Please find below 60 MCQ of Teaching Aptitude Question Based on CBSE UGC NET Solved Paper 1 Dec 2015 UGC NET exam. Answer of All those have been provided below the question.

1. Greater the handicap of the students coming to the educational institutions, greater the demand on the :
(1) Family
(2) Society
(3) Teacher
(4) State

Continuous and Comprehensive Evaluation (CCE) refers to a system of school-based evaluation of students that covers all aspects of students’ development. It is a developmental process of assessment which emphasizes on two fold objectives. These objectives are continuity in evaluation and assessment of broad based learning and behaviourial outcomes on the other.

In this scheme the term `continuous’ is meant to emphasise that evaluation of identified aspects of students’ `growth and development’ is a continuous process rather than an event, built into the total teaching-learning process and spread over the entire span of academic
session. It means regularity of assessment, frequency of unittesting, diagnosis of learning gaps, use of corrective measures, retesting and for their self evaluation.

Explanations-  A great teacher is passionate about teaching and working with children. They are excited about influencing students’ lives and understand the impact they have setting examples and also Acknowledging mistakes how ever they should not have Full-time active involvement in the institutional management.

Answer : (1) They are more objective than true-false type questions.

5. As Chairman of an independent commission on education, Jacques Delors report to UNESCO was titled :
(1) International Commission on Education Report
(2) Millennium Development Report
(3) Learning : The Treasure Within
(4) World Declaration on Education for All

Answer : (3) Learning : The Treasure Within

Explanations-  Learning: The Treasure Within is the report submitted to UNESCO, Paris by an International Commission on Education for the twenty-first century headed by Jacques Delors.

7. Which of the following statements is not true in the context of participatory research ?
(1) It recognizes knowledge as power.
(2) It emphasises on people as experts.
(3) It is a collective process of enquiry.
(4) Its sole purpose is production of knowledge,

Explanations- Participatory action research (PAR) is an approach to research in communities that emphasizes participation and action. It seeks to understand the world by trying to change it, collaboratively and following reflection. PAR emphasizes collective inquiry and experimentation grounded in experience and social history.

Explanations- Hypothesis testing involves the careful construction of two statements: the null hypothesis and the alternative hypothesis. These hypotheses can look very similar but are actually different.

In the practice of statistics, we make our initial assumption when we state our two competing hypotheses — the null hypothesis (H0) and the alternative hypothesis (HA). Here, our hypotheses are:

In statistics, the data are the evidence.

The jury then makes a decision based on the available evidence:

i.e Only  null hypothesis is tested.

Explanations- APA format is the official style of the American Psychological Association(APA) and is commonly used to cite sources in psychology, education, and the social sciences.

Notes: When citing a book in APA, keep in mind:

Explanations- A seminar may be defined as a gathering of people for the purpose of discussing a stated topic. Such gatherings are usually interactive sessions where the participants engage in discussions about the delineated topic. The sessions are usually headed or led by one or two presenters who serve to steer the discussion along the desired path.

11. A researcher is interested in studying the prospects of a particular political party in an urban area. What tool should he prefer for the study ?
(1) Rating scale      (2) Interview    (3) Questionnaire      (4) Schedule

Read the following passage carefully and answer question numbers 13 to 17.

I did that thing recently where you have to sign a big card – which is a horror unto itself, especially as the keeper of the Big Card was leaning over me at the time. Suddenly I was on the spot, a rabbit in the headlights, torn between doing a fun message or some sort of in-joke or a drawing. Instead overwhelmed by the myriad options available to me, I decided lo just write : “Good luck, best, Joel”.
It was then that I realised, to my horror, that 1 had forgotten how to write. My entire existence is “tap letters into computer”. My shopping lists are hidden in the notes function of my phone. If I need to remember something I send an e-mail to myself. A pen is something I chew when I’m struggling to think. Paper is something I pile beneath my laptop to make it a more comfortable height for me to type on.
A poll of 1,000 teens by the stationers, Bic found that one in 10 don’t own a pen, a third have never written a letter, and half of 13 to 19 years – old have never been forced to sit down and write a thank you letter. More than 80% have never written a love letter, 56% don’t have letter paper at home. And a quarter have never known the unique torture of writing a birthday card. The most a teen ever has to use a pen is on an exam paper.
Bic, have you heard of mobile phones ? Have you heard of e-mail, Facebook and snap chatting ? This is the future. Pens are dead. Paper is dead. Handwriting is a relic.
“Handwriting is one of the most creative outlets we have and should be given the same importance as other art forms such as sketching, painting or photography.”

Answer :   (4) That the teens have forgotten the art of handwriting.

Student Evaluation of Teaching (SET)- SET is one of several mechanisms for improving teaching and learning, Measuring quality in the classroom is a challenging but crucial factor in the development of any education system and its improvement –

19. Using the central point of the classroom communication as the beginning of a dynamic pattern of ideas is referred to as :
(1) Systemisation       (2) Problem – orientation
(3) Idea protocol         (4) Mind mapping

Explanations- Every message (Oral or written), begins with context. Context is a very broad field that consists different aspects. One aspect is country, culture and organization. Every organization, culture and country communicate information in their own way.Another aspect of context is external stimulus. The sources of external stimulus includes; meeting, letter, memo, telephone call, fax, note, email and even a casual conversation. This external stimuli motivates you to respond and this response may be oral or written.

Internal stimuli is another aspect of communication. Internal Stimuli includes; You opinion, attitude, likes, dis-likes, emotions, experience, education and confidence. These all have multifaceted influence on the way you communicate you ideas.

Explanations – This Question was based on  combined mean is a mean of two or more separate groups, and is found by :

Explanations – This Question was based on Pythagoras theorem pretty straight forward .

Given below in the table is the decadal data of Population and Electrical Power Production of a country.

Explanations- The National Mission on Education through Information and Communication Technology (NMEICT) has been envisaged as a Centrally Sponsored Scheme to leverage the potential of ICT, in teaching and learning process for the benefit of all the learners in Higher Education Institutions in any time any where mode. This was expected to be a major intervention in enhancing the Gross Enrolment Ratio (GER) in Higher Education by 5 percentage points during the XI Five Year Plan period.The three cardinal principles of Education Policy viz., access, equity and quality could be served well by providing connectivity to all colleges and universities, providing low cost and affordable access-cum-computing devices to students and teachers and providing high quality e-content free of cost to all learners in the country.

Explanations-  Byte, the basic unit of information in computer storage and processing. A byte consists of 8 adjacent binary digits (bits), each of which consists of a 0 or 1. The string of bits making up a byte is processed as a unit by a computer; bytes are the smallest operable units of storage in computer technology. A byte can represent the equivalent of a single character, such as the letter B, a comma, or a percentage sign, or it can represent a number from 0 to 255. Because a byte contains so little information, the processing and storage capacities of computer hardware are usually given in gigabytes (GB; one billion bytes) and terabytes (TB; one trillion bytes). Because the byte had its roots in binary digits, originally one kilobyte was not 1,000 bytes but 1,024 bytes (1,024 = 210), and thus one megabyte (MB) was 1,024 × 1,024 bytes and so on.

51. Assertion (A) : People population control measures do no! necessarily help in checking environmental degradation.
Reason (R) : The relationship between population growth and environmental degradation is rather complex.
Choose the correct answer from the following :
(1) Both (A) and (R) are true and (R) is the correct explanation of (A)
(2) Both (A) and (R) are true but (R) is not the correct explanation of (A)
(3) (A) is true but (R) is false.
(4) (A) is false but (R) is true.

Explanations- Chemical contamination refers to the addition or appearance of chemical substances in inappropriate places, including the workplace, home, food, and environment. It can also mean that the chemicals present are normally there or should be found there but they are present at a higher concentration than usual or at a concentration that is considered to be unhealthy. These chemical substance may sometimes pose little danger but in other instances can lead to acute (sudden and severe) poisoning or, in chronic (long-term) cases, it can damage organs or even lead to cancer.

Explanations- As part of the Paris Climate agreement, India had committed to produce 40% of its installed electricity capacity from non-fossil fuel sources by 2030. This would translate to around 350 GW by 2030, pushing the country’s expected total capacity to 850 GW power generation capacity.

India has set itself a target of adding 175 GW renewable energy capacity by 2022, which Singh recently said that the government will ‘over-achieve’, instead adding 227 GW within the same timeline. Currently, renewables account for around 20% of the country’s total installed capacity.

Explanations- Rashtriya Uchchatar Shiksha Abhiyan (RUSA) is a Centrally Sponsored Scheme (CSS), launched in 2013 aims at providing strategic funding to eligible state higher educational institutions. The central funding (in the ratio of 60:40 for general category States, 90:10 for special category states and 100% for union territories) would be norm based and outcome dependent. The funding would flow from the central ministry through the state governments/union territories to the State Higher Education Councils before reaching the identified institutions. Read more at – http://mhrd.gov.in/rusa

Article 165: Advocate General for the State

The Lok Sabha, the lower house of the Parliament of India, is made up of Members of Parliament (MPs). Each MP, represents a single geographic constituency. There are currently 543 constituencies.