Please find below 60 MCQ of Teaching Aptitude Question Based on CBSE UGC NET Solved Paper 1 Dec 2014 UGC NET exam. Answer of All those has been provided below the question.

4.    gif. jpg, bmp, png are used as extensions for files which store

10.    One of the anthropogenic sources of gaseous pollutants chlorofluorocarbons (CFCs) in air is
(A)    Cement industry
(B)    Fertiliser industry
(C)    Foam industry
(D)    Pesticide industry

Answer -(B)    Right to Life and Personal Liberty

27.    What is a Research Design ?
(A)    A way of conducting research that is not grounded in theory.
(B)    The choice between using qualitative or quantitative methods.
(C)    The style in which you present your research findings e.g. a graph.
(D)    A framework for every stage of the collection and analysis of data.

Answer -(D)    A framework for every stage of the collection and analysis of data.

29.    The frequency distribution of a research data which is symmetrical in shape similar to a normal distribution but center peak is much higher, is
(A)    Skewed         (B)   Mesokurtic
(C)    Leptokurtic    (D)   Platykurtic

30.    When planning to do as social research, it is better to
(A)    approach the topic with an open mind
(B)    do a pilot study before getting stuck into it
(C)    be familiar with literature on the topic
(D)    forget about theory because this is a very practical

Answer -(A)    approach the topic with an open mind

Answer – (B)    Mass Communication
34.    A smart classroom is a teaching space which has
(i)     Smart portion with a touch panel control system.

Answer – (B)    sensationalism and exaggeration to attract readers / viewers.

38.    If STREAMERS is coded as UVTGALDQR, then KNOWLEDGE will be coded as

Read the following passage carefully and answer questions 44 to 48 :

The literary distaste for politics, however, seems to be focused not so much on the largely murky practice of politics in itself as a subject of literary representation but rather more on how it is often depicted in literature, i.e., on the very politics of such representation. A political novel often turns out to be not merely a novel about politics but a novel with a politics of its own, for it seeks not merely to show us how things are but has fairly definite ideas about how things should be, and precisely what one should think and do in order to make things move in that desired direction. In short, it seeks to convert and enlist the reader to a particular cause or ideology; it often is (in an only too familiar phrase) not literature but propaganda. This is said violate the very spirit of literature which is to broaden our understanding of the world and to range of our sympathies rather than to narrow them down through partisan commitment. As John Keats said, ‘We hate poetry that has a palpable design upon us’.

Another reason why politics does not seem amenable to the highest kind of literary representation seems to arise from the fact that politics by its very nature is constituted of ideas and ideologies. If political situations do not lend themselves to happy literary treatment, political ideas present perhaps an even greater problem in this regard. Literature, it is argued, is about human experiences rather than about intellectual abstractions; it deals in what is called the ‘felt reality’ of human flesh and blood, and in sap and savour (rasa) rather than in arid and lifeless ideas. In an extensive discussion of the matter in her book Ideas and the Novel the American novelist Mary McCarthy observed that ‘ideas are still today felt to be unsightly in the novel though that was not so in ‘former days’, i.e.. in the 18th and 19n centuries. Her formulation of the precise nature of the incompatibility between ideas on the one hand and the novel on t other betrays perhaps a divided conscience in the matter and a sense of dilemma shared by many writers and readers : ‘An idea cannot have loose ends, but a novel, I almost think, needs them Nevertheless, there is enough in common for the novelists to fee!… the attraction of ideas while taking up arms against them – most often with weapons of mockery.’

44.    The constructs of politics by its nature is
(A)    Prevalent political situation    (B)    Ideas and Ideologies
(C)   Political propaganda    (D)   Understanding of Iranian nature

46.    The observation of the novelist. Mary McCarthy reveals
(A)    unseen felt ideas of today in the novel
(B)    dichotomy of conscience on political ideas and novels
(C)    compatibility between idea and novel
(D)    endless ideas and novels

Answer –  (B)    dichotomy of conscience on political ideas and novels 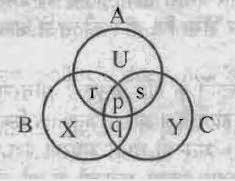 51.    “A man ought no more to value himself for being wiser than a woman if he owes his advantage to a better education, than he ought to boast of his courage for beating a man when his hands were tied.”
The above passage is an instance of
(A)    Deductive argument    (B)    Hypothetical argument
(C)    Analogical argument    (D)    Factual argument

For a country CO, emissions (million metric tons) from various sectors are given in the following table. Answer the questions (55 to 60) based on the data given :

The information provided on ugcnetpaper1.com  is gathered from various official/unofficial online and offline resources. Although we take every possible precaution to ensure that the content on our website is as authentic and accurate as possible followed by the manual check, there still might have some human mistakes. And we certainly are not responsible for any losses caused because of the inefficient information on the website.
0
Share FacebookTwitterGoogle+ReddItWhatsAppPinterestEmailFacebook MessengerLinkedinTumblrTelegramPrint