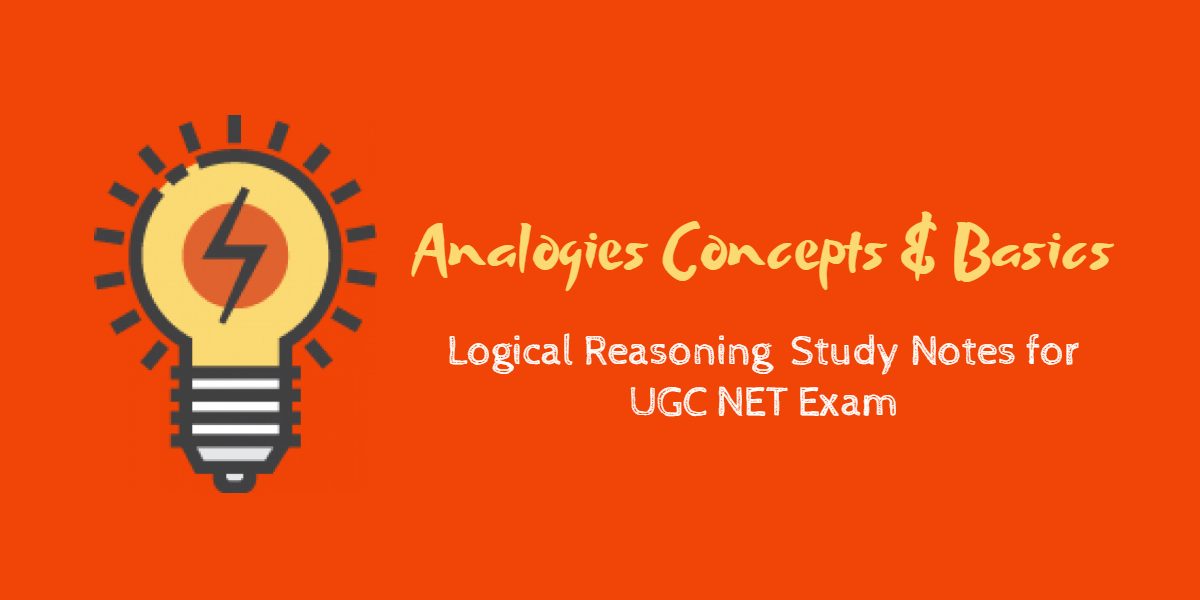 In this article we have covered the important topic ‘Analogies’ based on UGC NET EXAM Syllabus.  If you see the previous year’s Question based on logical reasoning you will find that 1-2 Question were asked based on Analogies that too mostly from Number based or Letter Analogies.

So we have covered important concepts and tricks to solve questions based on analogies for UGC NET Exam Syllabus. We have also covered different types of Verbal Reasoning Analogy Questions and Answers to explain details around those.

This topic is asked in various examination and in ‘SSC’ and ‘Railways based examination multiple types of question are asked based on all three types of Analogies (Number, Letter, Word based)

‘Analogy’ means ‘correspondence’ or ‘Similar items’. In other words, we can say the similarity or similar relation existence between the given subject.

In analogy based question section, you will find that a particular relationship is given and another similar relationship has to identify from the alternatives provided.

Analogy based tests are meant to test a candidate’s overall knowledge, power of verbal reasoning and ability to think concisely and accurately.There is three types of Analogy-

Types of Question Pattern of analogy

When you see questions based on analogy, it will be mostly a pair of numbers/letters/words is given that have certain relationship between them.

This pair will have followed by a third numbers/letters/words.

Sometime Question were asked to fill in the blanks based on similar pattern.

The candidates are asked to identify and point out relationships, similarities or differences, and dissimilarities in a series or between groups of numbers.

In most of the cases relationships between the numbers in a given pair can be any of the following:

Examples based on Number Analogy

The questions based on letter analogy are similar to number analogy. Here, the questions are based on the relationship between two groups of letters on each side of the sign : : .

Normally, three pairs of letters are given followed by a question mark where the fourth pair of letters is supposed to come.

Examples based on Letter Analogy

In each group, one letter is skipped between every two consecutive letters. So, the missing term will be ACEG.

In word analogy questions there is a certain relationship between the two given words on one side of’:: ’ and one word is given on the other side.

Students are asked to find the correct alternative that has same relationship with that word.

Tip! Look Out for the Kinds of Relationship they exhibit

There are many possibilities in establishing a relationship. Here are some useful points on the basic knowledge required for the test.

Examples based on Word Analogy

#3 In each of the following questions, select the related word from the given alternatives.

Fish swims in Water and Bird flies in the Sky.

Important – This is purely practice based section and you need to solve as much as question you can solve to make your self confident on question based on these topics.